Morikawa Receives An Omega Seamaster with his Victory

SAN FRANCISCO – (August 9, 2020) OMEGA, Official Patron of the PGA of America, presented OMEGA brand ambassador Collin Morikawa with an OMEGA Seamaster 300 at the conclusion of the 102nd PGA Championship at TPC Harding Park in San Francisco. Morikawa won the PGA Championship with an overall score of 69-69-65-64 = 267 (-13) for his first Major Championship victory. He defeated Paul Casey and Dustin Johnson by two strokes. Morikawa’s weekend total of 129 is the lowest closing 36-hole total score by a champion in men's golf major history.

The 23-year-old, who joined the OMEGA family at the beginning of 2020, had four birdies and one eagle to finish with a six-under-par final round. Morikawa is now a three-time winner after winning his first PGA TOUR title last year and his second TOUR win earlier this summer. A chip-in on hole 14 and an eagle on the 16th hole secured his victory. Morikawa drove the 294- yard, par-4, 16th and made the seven-foot putt to get to his winning score of 13-under par. 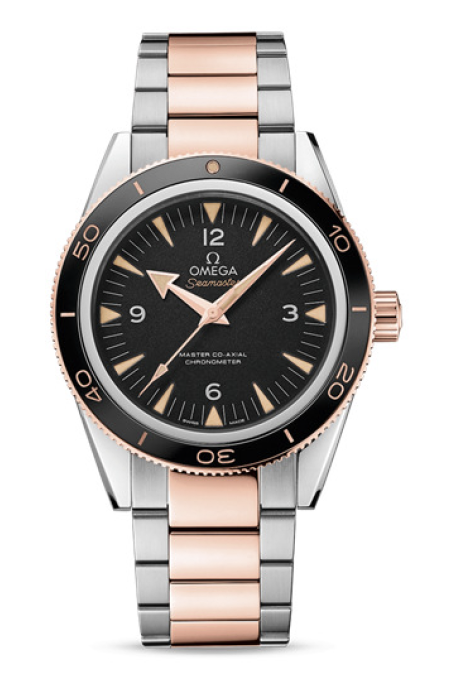 “We’re thrilled to congratulate our own Collin on his historic victory,” said Raynald Aeschlimann, President and CEO of OMEGA. “After a well-earned victory, it’s our pleasure to present him with a timepiece that is worthy of a winner.”

The Seamaster 300 has become a legendary divers’ timepiece ever since its first release in 1957. The PGA Championship winner’s watch is a modern 41 mm model presented in stainless steel and 18K Sedna™ gold – OMEGA’s own red gold alloy. Along with a sand-blasted black dial, it is driven by the superbly precise OMEGA Master Co-Axial Calibre 8400.

ABOUT THE OMEGA-PGA OF AMERICA PARTNERSHIP

OMEGA has been the PGA of America’s Official Patron and Official Timekeeper since 2011: further proof of the brand’s commitment to the growth of golf, both globally and across the United States. The PGA of America is the world’s largest sports organization, comprised of nearly 29,000 PGA Professionals. Through this constructive partnership, OMEGA has established and maintains close ties with experts who work daily to grow interest and participation in the game of golf.